Year 6 pupil Anna De Oliveira has performed alongside Sheridan Smith and Jason Donovan in Joseph and the Amazing Technicolor Dreamcoat at the London Palladium.

The reimagined production to celebrate the show’s 50th anniversary included only 8 children, instead of a choir. The young actors took on roles and were involved in the action throughout the show.

Anna’s scenes involved spectacular choreography and singing and dancing that impressed the thousands seated in the audience. She particularly enjoyed the high-octane Joseph Megamix at the end of show, which received a standing ovation every night. 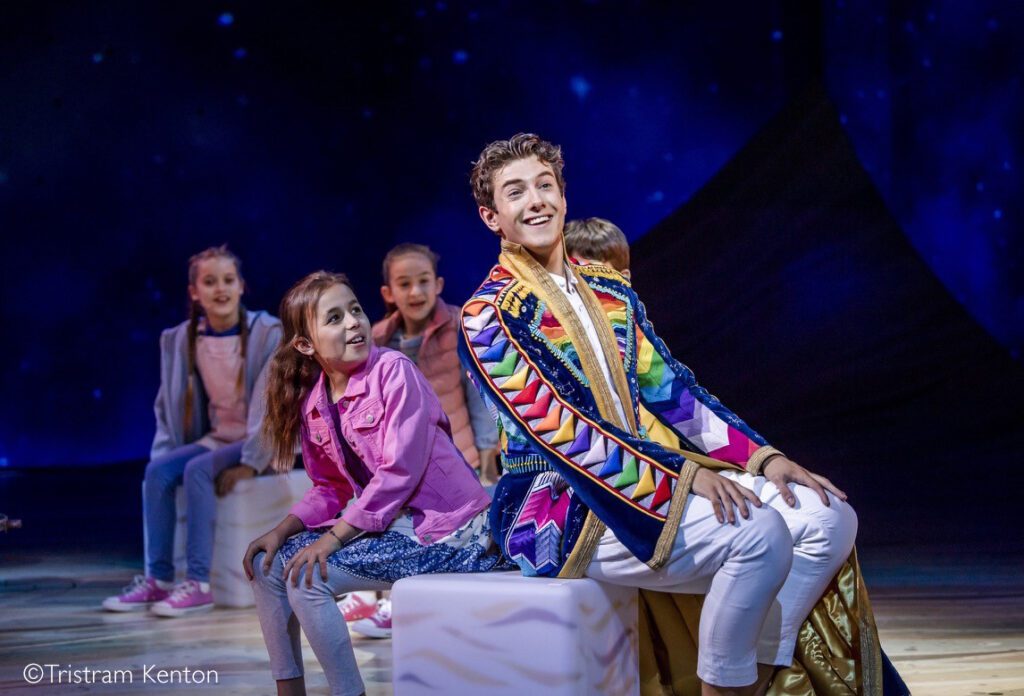 Anna was cast as one of the children that tells the story along with the narrator.  In the scene where Joseph first appears on stage, Anna’s acting played a part in convincing the audience how amazing and astonishing the lead character is.

In addition Anna was cast as a wife and a goat who the brothers wanted to kill for its blood to smear on Joseph’s coat to convince Jacob that Joseph had been killed.  She portrayed the ‘sassy and audacious’ characteristics of the goat and built a rapport with the narrator Sheridan Smith. In every show she delivered her line “Just dressing up you said” with perfection.

“It felt amazing performing in the show” said Anna. “A lot of the time my family and friends came to watch me. When I heard them all cheering and wooing it made me so happy. I could barely contain my excitement, but I kept my composure and stayed in character.

“The London Palladium is an absolutely magical place to perform. It was a lot to take in when I first arrived for rehearsals. It’s huge! The scenery was full of pyramids and the floor across the whole stage looked like sand.

Anna also appeared on ITV’s This Morning with Jac Yarrow, the rising star who played Joseph.

“The whole experience has been really beneficial. I feel more confident, and I feel like I’ve become a better actress by learning from all the other stars in the show.”

While the majority of the shows were during the school holidays, Anna has impressively managed to balance her drama commitments with school life. In fact, she recognises the impact of her teachers and lessons in English and Drama have had on helping her reach this level of success.

“My memories at Berkhamsted go right back to Pre-Prep. My first role was playing Mary in the Nativity play. Looking back, my singing sounded awful then!  I’ve had so many amazing opportunities at school and I’m pleased that each one has given me the chance to improve. “

“My school experiences have really helped me. The drama teachers have taught me so many techniques and they’ve guided me towards being more confident.”

Music and Drama lessons, as well as the extra-curricular opportunities are central to life at Berkhamsted Prep.  Anna has performed in a multitude of school productions including the Rainforest play in Year 4. Her finale at Prep will be the much-anticipated 2020 Year 6 play held in the Centenary Theatre at Kings Campus.

Her last show of Joseph was this weekend, Saturday 6 September.  Speaking ahead of the last show she said “Going into the last show will be emotional. I will be holding back the tears.  I have made some wonderful friends and we’ve all contributed and achieved so much.  It’s been an incredible journey, and we are proud of how far we’ve come.”

Her class teacher Marcus Fleet said “It is wonderful to see Anna performing in a highly successful West End show. She is incredibly enthusiastic about her acting and I was delighted to see her aiming high in order to fulfil her dreams.

“All children in the Prep School take part in weekly LAMDA sessions, and Anna’s success will no doubt be a catalyst for more ambition and success amongst our pupils.

Berkhamsted Prep – Beyond the Curriculum