An Around the World sporting challenge has taken Berkhamsted School by storm during lockdown. Crafted by the Senior School PE Department, pupils throughout the whole school aged 3 to 18 were set the target of 40,075km in 14 days. Pupils used their daily exercise to locally run, walk, cycle or register a personal contribution by any means possible.

The combined effort was tracked to have reached New Zealand (19,000km) in just seven 7 days. By day 9 they’d arrived in California. There were no immigration visas to worry about, and sadly there was no sign of any West Coast climate. By the final weekend of the challenge there was just 3,000k to go, about the distance between the eastern tip of Canada and Berkhamsted.

From frozen Atlantic to the outback of Australia

Local weather conditions turned during the last day of the challenge. Was the huge flurry of snow going to prevent TeamBerko from crossing the Atlantic? Certainly not! Remarkably, a further 18km was clocked up on the final weekend. The final total reached 54,975km. Enough to circumnavigate the globe and then travel to central Australia!

“I think it was a brilliant achievement for the school to total over 54,000km’s. It’s a pretty breath-taking number of metres to think about… But the fact that the School surpassed the target number just shows the hardened spirit of the School, from Nursery all the way to the Sixth Form. It’s a great achievement to have made in difficult times” said Casper (Year 12).”

Casper individually added 302km to the total. He started with a few 13km runs, then switched his schedule to high intensity cycling. Head of House Mr Graham Burchnall was hot on his heels, motivating him with a personal contest between staff and student. Mr Burchnall eventually completed 282.83km and provided exceptional support for all in his House, Reeves.

After completing Land’s End to John O’Groats to raise money for Parkinson’s UK, the Chiltern Hills posed no threat to Casper, but the winter conditions were an extra challenge to contend with. 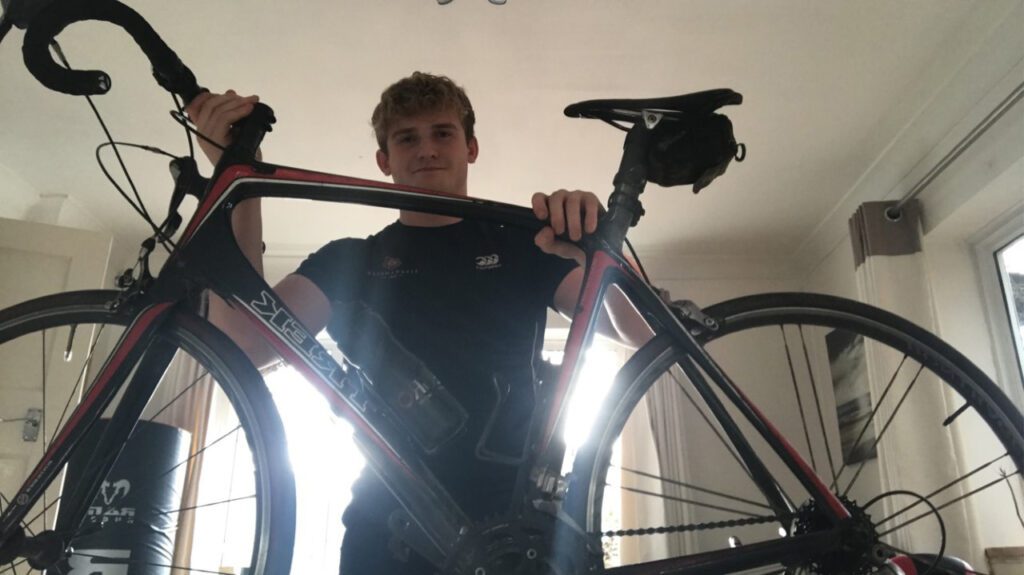 Longing for the muddy rugby pitches

“On the runs I was slipping over a lot and getting caked in mud, but that was a little burst of nostalgia that took my mind back to the rugby pitch – which I hold very close to my heart. On the watt bike I’d begin to sweat so much that it was practically simulated rain! But that wasn’t too bad… Then finally on the road bike we got fairly lucky with the weather, apart from the biting cold.

“I think everyone in the school should be proud of what they’ve achieved. To go out and push yourself out of your comfort zone, whether that’s just getting out the house for a jog or testing your limits, all those individual totals added up to the bigger picture.”

In just 14 days Ellie (Year 11) accomplished 208km. The majority of her distance was achieved by running and topped up with some walking and rowing. Ellie has enjoyed the raised level of exercise especially during these uncertain times. She believes that the PE Department challenge has helped keep many at Berkhamsted Girls motivated which is a huge boost for mental wellbeing.

Aiming High and Serving Others

The Around the World challenge is a fine example of the school values of aiming high with integrity, being adventurous and serving others.

Some pupils combined the sporting endeavour with a fundraising campaign for charity. Bartrum House began fundraising for Florence Nightingale Hospice in Aylesbury in December. They hope to raise £2,000 to help fund the best end-of-life care and services to local people who need it most.

Arthur (Year 7) of Bartum led the way by completing 242km– the greatest distance of all pupils at Berkhamsted Boys. He originally set out to cycle 5km per day on his exercise bike, but he ended up achieving much more.  He could maintain speeds of over 15km per hour.

Berkhamsted School Serving others during Covid-19

Heatherton take on the Chilterns

The girls at Heatherton know and endorse the School’s value of aiming high with integrity. They set out to achieve the greatest distance possible between them. They ran, walked and cycled through most of the Chiltern area surrounding Amersham. Their dedication to the challenge was hugely impressive.

We are so impressed with how active the Heatherton pupils have been for the #berkoaroundtheworld challenge. They have travelled 1199km! That’s about the distance of Amersham to Spain. 🇪🇸

Now for the final stretch! pic.twitter.com/lf1V6W2KyC

Over 90% of pupils at Berkhamsted Prep took part in the Around the World challenge. They showed a tremendous sense of unity as they worked together (from a distance) to achieve one goal. The children of keyworker families who are in school recorded a video to show how they completed the challenge:

Pre-Prep – our youngest pupils go Around the World

The majority (nearly 150) of Pre-Prep pupils took part in the challenge. There was a huge sense of collaborative achievement as the children added 2,382km. Their photos illustrate tremendous levels of enthusiasm and perseverance for our youngest participants.

Director of Sport Jo Vila said: ” Thank you to every pupil who contributed to our Berkhamsted Around the World challenge. It’s amazing what can be achieved in 14 days when a community comes together for a common goal. Using this unique situation we find ourselves in as an opportunity to connect pupils from Pre-prep right up to Sixth Form has been particularly special.

“We recognise the boost to mind, body and spirit that physical activity and participation gives to all ages, and that is so important as we navigate our way through the coming weeks. Particular thanks and congratulations to Miss Steed, and all supporting staff throughout the Berkhamsted Group for making the challenge a great success.

The Berkhamsted Community and Covid-19

Events since March 2020 has brought home to us more than ever before that Berkhamsted is more than just a school where people attend. Berkhamsted is a web of relationships, it is a school with a strong set of values and a rich culture. It is these features together with the commendable resilience of our pupils and staff that have ensured the education and the community has thrived during these adverse times.

Learn more about Berkhamsted’s response to the pandemic: