An ecstatic audience of nearly 2,000 saw Berkhamsted School’s We Will Rock You at Centenary Theatre over four days.

It was declared the ‘most ambitious’ school production ever seen at Berkhamsted. The cast consisting of students from Year 11-13 performed exceptionally with displays of drama matching that of the west end stage.

The school’s version of Queen’s musical attracted around 400 children from nearby schools for the matinee on Tuesday followed by three consecutive nights of near capacity audiences who went wild for the smash-hit filled evening. 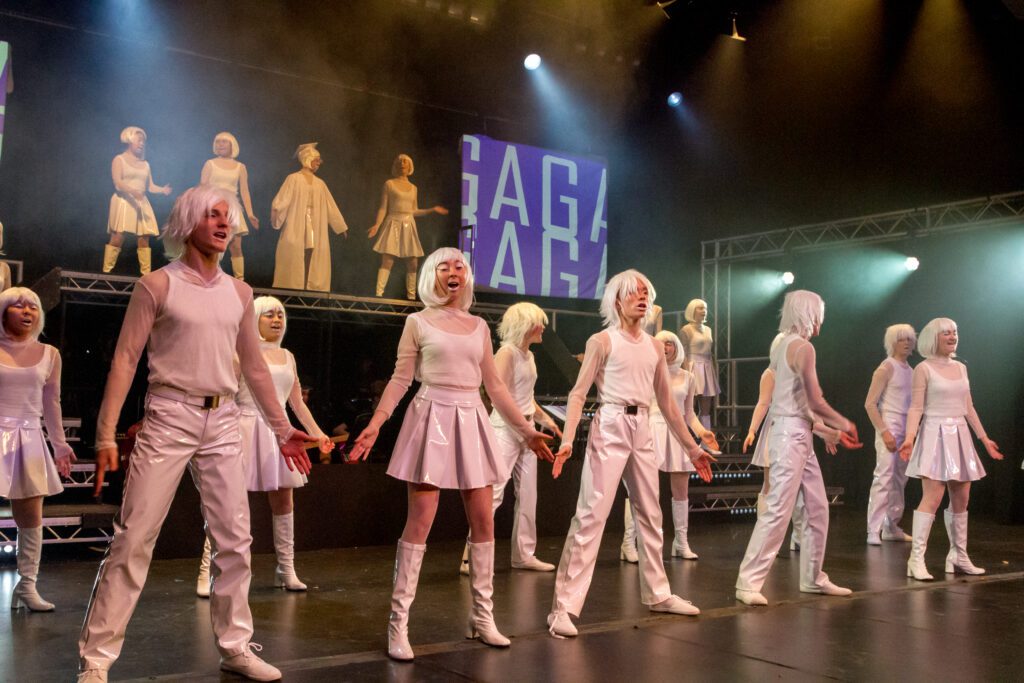 “The standard of Drama was one of our key reasons for choosing Berkhamsted for our son and daughter. The department’s commitment to the art and children are truly exemplary.” 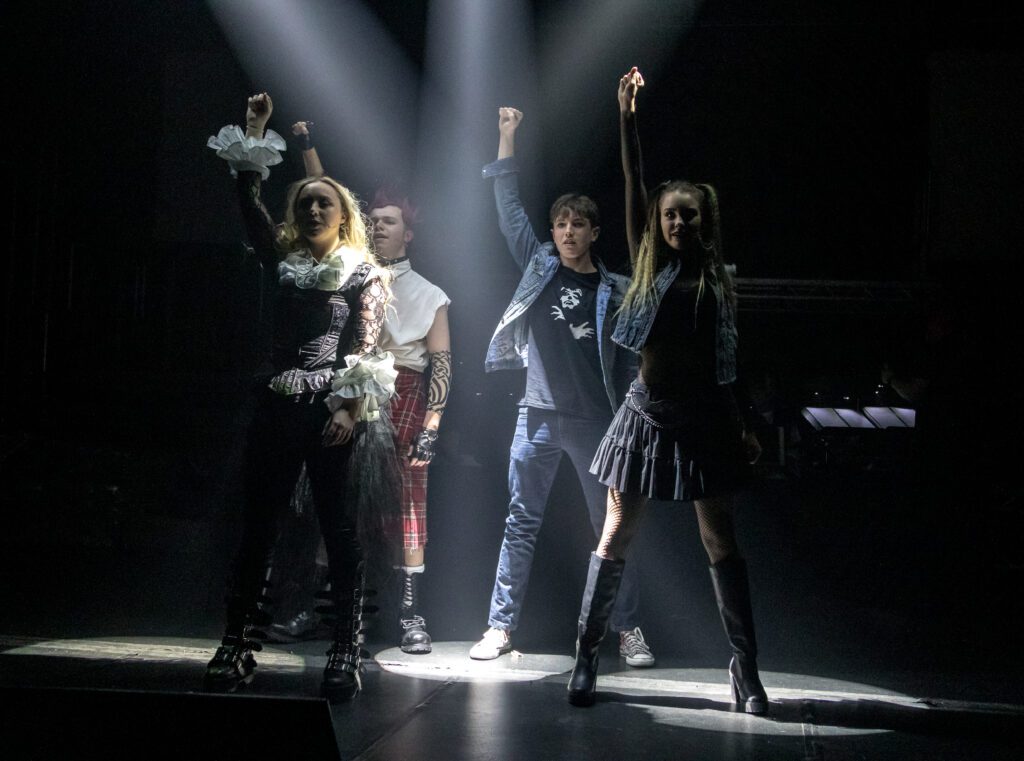 James Green, a Year 12 student playing Khashoggi valued the way the cast bonded to make the musical as entertaining as possible. He said “I have enjoyed every minute of ‘We Will Rock You’, from learning harmonies around the piano to the long evenings in costume in anticipation of the performances.

“After weeks of rehearsals it was a real pleasure to perform the finished product to an enthusiastic audience. I know that the whole cast enjoyed the laughs and the applause for which we had worked so hard in the weeks beforehand. 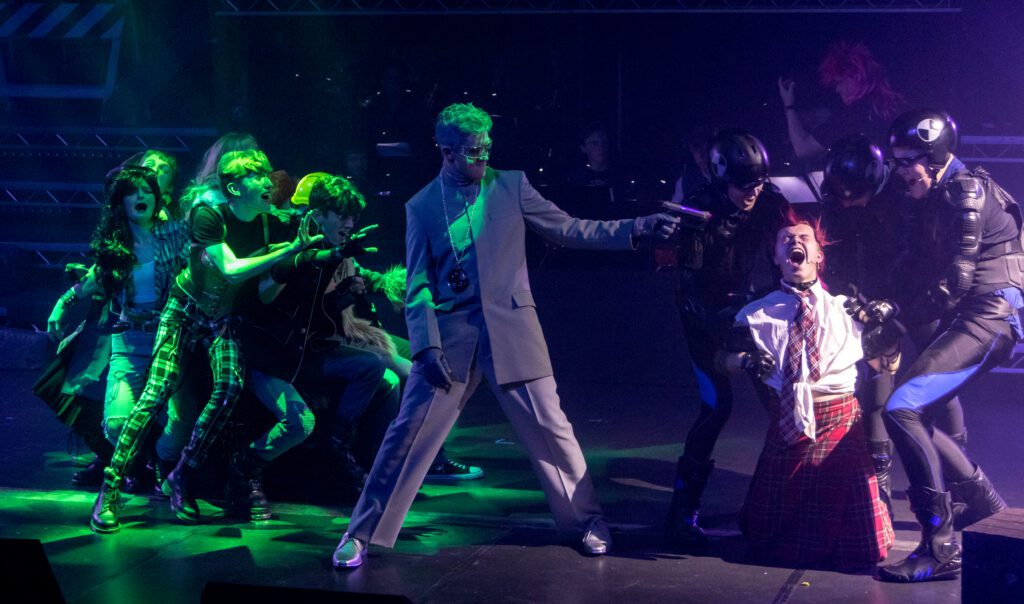 “Preparing for a production like ‘We Will Rock You’ inevitably requires huge dedication to rehearsal. With numerous Sundays in the theatre perfecting the show, it can be a challenging process. The cast, however, formed strong bonds from as early as the first audition, and this has made the preparation great fun. As a cast we have felt an enormous sense of gratitude for the opportunity we have been given this year to perform such a play.

Unforgettable experience for the cast

“I can safely say that we will never forget being a part of this show.”

The cast and technical team also kindly shared their knowledge and skills with the younger children at Heatherton School. The girls from Year 5 were fully immersed into the theatre experience as they were taught songs, dance routines and saw a demonstration on how lighting and sound is used to enhance the performance.

Year 5 students on a performing arts workshop and and back stage tour of ‘We Will Rock You’. Learning about all the technical aspects of the production culminating in a performance. ⁦@HeathertonSch⁩ pic.twitter.com/XIHvp5MpVY

Tegan McBride is in Year 11 and has prepared for the lead part of Scarmouche while studying for her GCSEs. She said “I feel ‘We Will Rock You’ has been very successful with all the work the tech crew have put in along with the band and the directors also, and I have really enjoyed being a part of the show.

“I knew I was signing up to a huge commitment when I accepted my role as Scaramouche. With my mocks falling just after the end of the shows, it has been a great challenge to keep up with school work as well as balancing all the rehearsals. It’s all been worthwhile however and I’ve felt so lucky to have had this opportunity.”

Teagan has recently earned a place with a talent agency and has started to perform in professional shows.

Had a fab night rockin’ out and watching We Will Rock You at @berkhamstedsch. A brill production with some great young emerging vocal talent! Well done all and thanks to @samroseharris for inviting me! @berkhamstedboys @berkhamstedgirl @berkodrama

Singer and dancer Izzy Bly said “I loved the challenge to remember each amazingly choreographed dance, whilst also trying to capture the style for each one, performing it with my own dynamic flare.”

“From behind the curtains, seeing the packed Centenary Theatre, we were all filled with a combination of nerves and excitement. However, as soon as we performed our first number and the audience began so sway along to Queens iconic tunes, I was filled with energy and joy.

“It was a truly amazing last show to be a part of after 14 years at Berkhamsted School.”

Extraordinary evening’s entertainment. By ANY standards that was a triumph. The ghost of Freddie was rocking with you all out there. #thoseAREthedaysofourlives @berkhamstedsch ⁦@joe_beadle⁩ pic.twitter.com/TIHpHQiWCP

Co-director Dominic Curtis said “We Will Rock You was the most ambitious and most technically complicated production ever seen at Berkhamsted School. Following the release of the Freddie Mercury film Bohemian Rhapsody, our show was fitting with the nation’s reignited love for all things Queen.

“Every member of the cast performed exceptionally well throughout the week. It left the audience in awe of the abundance of talent amongst our students.

“We are proud of what we have achieved together. Thank you Emma Burgar for her outstanding work on costumes, Beth Brown for the superb choreography and Malcolm Melling and Micheila Briggenshaw for their excellent leadership in relationship to the music and to everyone working behind the scenes to make this a success.

“The Dedication, commitment and enthusiasm of the cast has been wonderful for us to see. Today the set will be dismantled, the lights taken down and the costumes stored but we hope the memory of this production will live on in the hearts of our students for many years to come.”