Within ten years of leaving Berkhamsted Boys, he became the first person to sail solo around the globe non-stop.

50 years ago Sir Robin Knox-Johnston sailed from Falmouth on a journey around the world. Facing shark infested waters, illness and 80ft waves he made it back to Falmouth a legend, winning the Golden Globe Race. Find out more about his current exhibition -> https://t.co/NcP8bxTtuh pic.twitter.com/V72LTcJ62I

It’s an achievement that has been celebrated by the school community for 50 years. The Berkhamsted pupils of 2019 proudly associate their school with the adventurous and high achieving alumina such as Sir Robin.

William Brown in Year 2 of Pre-Prep travelled with his family to Falmouth, Cornwall to join the celebrations where Robin Knox-Johnston completed his extraordinary sail in 1969.

Earlier in the year, pupils in Year 2 completed an explorer project.  William enjoyed the opportunity to discover the geography of oceans. He learned about the challenges Sir Robin may have faced on his expedition such as huge waves, storms and mechanical issues. 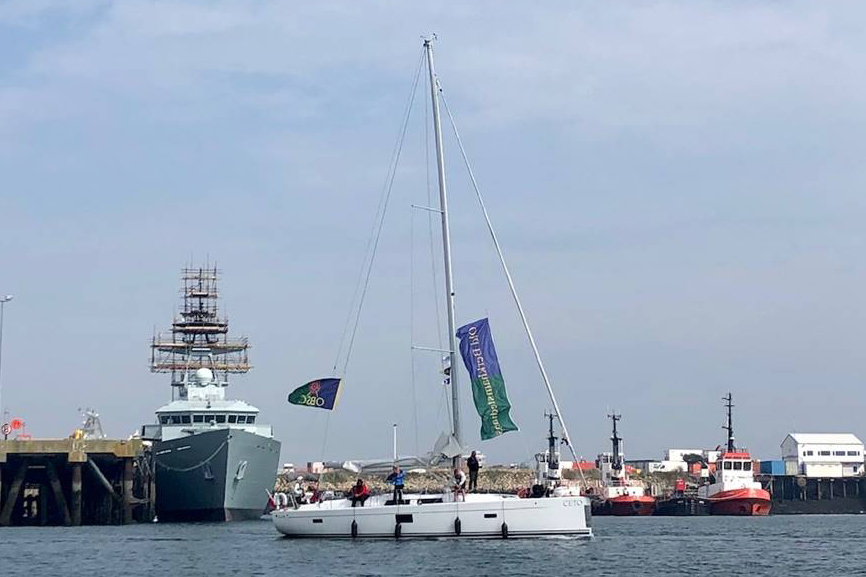 Like many Berkhamsted pupils, William regularly takes part in swimming lessons at the Knox-Johnson Sports Centre.  He would often stop to look and admire the Golden Globe Trophy placed at the centre in recognition of the legendary Berkhamstedian.

His mum Catherine Brown said “William really loved the explorer project. From seeing Sir Robins trophy on display, he was inspired to find out more about his fellow Berkhamstedian. It made the whole project more tangible – having seen the trophy and knowing that Sir Robin also went to the same school.

“To then meet Sir Robin and to have the opportunity to ask him a question during the talk during the anniversary celebrations was absolutely thrilling for him. He was really inspired and he has taken this experience to his heart.”

Fascinated with Sir Robin’s triumph, William recognised that although it was a race against other sailors, the greatest battle was the battle of will to never give up.

Karen O’Connor, Head of Berkhamsted Pre-Prep said “we work tirelessly to spark a curiosity in our children to learn more.  Therefore to hear that William had pursued his interest in explorers even further, by going to meet Sir Robin is testament that our approach to learning is inspiring and proof that our pupils can take great inspiration from Sir Robin Knox-Johnston’s achievement. Determination, being positive, and a sense of adventure are traits that the children develop throughout their life at our school. It was fantastic for William to come back to school and share his experience at Falmouth with everyone.”