No less than nine Berkhamstedians have been selected to play for Wasps and Saracens U18. It is a remarkable feat to have such talent who have all progressed in rugby through the School.

The Wasps and Saracens academies are world-renowned. England stars Owen Farrell and Maro Itoje are products of the Saracens’ famed setup as well as Berkhamsted’s very own Will Fraser.  Fraser made 59 appearances for the Fez Boys between 2011 and 2017 winning 2x Premiership titles, 2x European titles and a domestic cup. 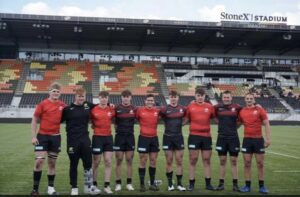 In the footsteps of Saracens and Wasps greats

On the day where eight players from Berkhamsted pulled on the Saracens kit, they defeated Northampton Saints 34-31. It was the first U18 fixture since the pandemic, and it was played at the 10,000 seater StoneX Stadium – still under Covid restrictions, of course.

Meanwhile one Berkhamsted student was selected for Wasps. Daniel Barnett (Year 11) plays Full Back and has hopes to play professional rugby in the future. “My best experience was being picked for the Wasps U18 game at Broad Street RFC against Yorkshire. At this level I have gained a lot of confidence with my ability to play in a high intensity environment.”

Joe Pannese (Year 12) plays Inside Centre. He said “Before coming to Berkhamsted I never thought I’d have a serious opportunity to play competitive rugby. The coaching and mentoring I received when I first arrived allowed me to realise what I could achieve if I worked hard enough for it. One of the best things about rugby at school is playing with your mates. It makes you want to work harder and improve for the people around you.”

Casper Jack (Year 12) adds, “The School has had a huge impact on us academy boys to help us get to this stage. The likes of Mr Mahoney, Mr Gibson, Mr Riley and Mr Mackay have all helped us develop into passionate and determined players with a disciplined skill set which helps us play at such a high level. From joining Berko we’ve been inspired to aim for the highest standards that we can, which has also contributed to our successes.

Casper has now been in the Saracens Academy for 3 years, joining when he was 14. His position is Second Row.

Casper continues “It’s a huge honour to wear the Saracens badge and play/train at StoneX stadium which has seen so many world class players. Every time I’ve set foot on that pitch coming out of the changing rooms it’s felt incredibly surreal.  All of us lads work incredibly hard at our rugby as well as our studies. It is a relatively time-consuming workload, but then again, I wouldn’t have it any other way. With the coaching and drive of the staff at Berko and the intent of us boys, I believe there could next year be even more than 9.”

Third best Independent School for Sport in the UK

Whilst nine players selected for Wasps and Saracens is remarkable, two further Berkhamsted students have every chance of academy selection once they recover from injuries.  With all the talent and determination surrounding the Berkhamsted rugby setup, the return to school rugby in September is very exciting.

Beyond the Curriculum and Berkhamsted Boys

Beyond the Curriculum and Berkhamsted Sixth