Prep School tweets were viewed a total of 1.2 million times throughout the 2017/18 academic year.  We received around 6,000 likes and retweets from our Twitter followers, and every single one was very much appreciated!

The year on Twitter is an opportunity to look back at memories made and the opportunities enjoyed by Prep pupils since September.

Headteacher Jamie Hornshaw said “Each year, the children embrace different ways of learning, become more creative and try out new opportunities available to them. We are proud to share school life to our parents, family members and the wider community via social media”.

We welcome everyone to the start of another new school year, especially those joining the Berkhamsted community this term! #backtoschool pic.twitter.com/RgjrqEsP8a

All 48 girls in Year 5 enjoyed netball matches against Haberdashers this afternoon. #teamberko pic.twitter.com/rKecYGlMzQ

Our fantastic 2017 ISI Inspection report is now on our website. https://t.co/FLqNYbUuro

The school office took a phone call to declare our 3-day Independent School’s Inspection will take place within 24 hours.

The school was judged as excellent in all areas, the highest outcome possible under this inspectorate’s framework. Words such as ‘articulate, highly-developed, collaborative & independent with excellent attitudes’ to work were used to describe the children’s academic and other achievements.

We held a poignant remembrance service this morning around the amphitheatre. A fantastic ‘last post’ played by Jack. #teamberko @PoppyLegion pic.twitter.com/F4gG6rTghd

George with his bronze medal in the 50m breaststroke at the Primary Individual Champs yesterday. #teamberko pic.twitter.com/2C9GLs3od6

22 players took part in an U12 Fives tournament at Eton on Sunday. Pairs were mixed from competing schools. Ben beat 12-4 Jonny in the boys’ final and Alice won the girls’ final 12-1 with her partner from Ipswich School. Well done to everyone! #teamberko pic.twitter.com/klLQ1m0cKu

Fives is a popular sport at Prep, and levels of interest are growing each each. The school is producing players of a National standard, including Noah and Ben who were crowned National U11 Champions. The Eton Fives Association named our very own Mr Perrie as coach of the year.

Mortain win the House Art competition this year. Congratulations to Evie (1st), Thomas (2nd) & Martha (3rd) for their individual placing. Thanks also to Jo from @BerkhamstedArts for judging the record number of entries we received! pic.twitter.com/QJr8wEOtqk

Carol service at St Peter’s Church with a selection of traditional hymns and stories describing the true meaning of Christmas. pic.twitter.com/AIeAky4HtM

Congratulations to George J (Year 6), Avi & Jack W (Year 5) who have qualified for the National round of the Primary Maths Challenge. Good luck to all three for the next stage of the competition! @PMC_Maths pic.twitter.com/26YKgzmySk

George went on to achieve a bronze certificate for scoring in the top 2.5% of competitors in the country. Avi and Jack were runners-up out of 53 Year 5 teams.

Madeleine (cello) and Beatrice (violin) have been offered places the National Children’s Orchestra. An exceptional achievement for the two pupils at Berkhamsted Prep #teamberko https://t.co/9MRe8WTuQ8 pic.twitter.com/8lupuRBQqs

Talented sisters Madeleine and Beatrice Murray were offered places in the National Children’s Orchestra for 2018.  The range and standard  of music on display at Prep is incredible. Children playing a musical instrument has increased 70% within the last 6 years, and ABRSM exam results have been outstanding!

Excellent preparation ahead of the LAMDA exams – pupils performed in front of an appreciative audience of parents. pic.twitter.com/HillV12Wu0

In curriculum Drama lessons, every child has been given the opportunity to gain a qualification through the London Academy of Music & Dramatic Arts. This year, 114 children were awarded a Merit and 232 received a Distinction, including every pupil in Year 3.

13. Mr Findlow: searching high and low for a worthy replacement

Goodbye Mr Findlow who leaves the Prep School as a teacher after 33 years. We will miss his kindness & friendship to our school community. pic.twitter.com/vhESEFmMAO

“A fantastic teacher he will be missed.” “Honestly what a man!” respond parents on Twitter.

Regional Champions and Top 10 finish at the @isfafootball National Finals held at @StGeorgesPark. An excellent way to cap off a fine football season for Berkhamsted Prep. 👉 https://t.co/aqDgdEnxzc pic.twitter.com/XEYHS8OoF0

A great opening night of the Year 6 production of ‘The Return to the Forbidden Planet’ – we’re all set and ready to board for tonight’s performance. @berksch_drama pic.twitter.com/aI9BPZLyWq

16. Aiming high and being adventurous

A busy first afternoon with all groups on-site for various activities. This evening, some children took part in the Skern Olympics whilst others went on the lookout walk to Appledore. @skernlodge pic.twitter.com/UKAv0n3lMI

A multitude of adventures provide our children with challenges in a number of ways, including spending time away from home, testing boundaries of self-confidence and fear as well as physical aspects not covered by traditional PE & Games.

Wow! We were very lucky to have some amazingly talented musicians from @berkhamstedprep perform for us in the Chapel today. Thank you for coming in, it was a pleasure to listen to you all. #berkhamstedprep #berkhamstedschool #berkhamsted pic.twitter.com/xx7JephA1x

Through our value Serve Others, we have continued to support at least 13 charities this year. This has not just involved giving money although over £5000 has been generously donated so far. We recognise that pupils have provided enjoyment for others outside of our school community, such as the musicians who visited Watermill House and The Hospice of St Francis.

A wonderful morning at Prize Giving with @C_Edwards23 An inspiring speaker and role model for our children. @CentTheatre @berkhamstedsch pic.twitter.com/FycC6qCW3l

We were delighted to welcome England’s most successful women’s cricket captain Charlotte Edwards at Prize Day. As a school we have fully embraced cricket as a summer sport for girls and boys alike, with everyone representing the school at least once this year in fixtures or tournaments against other schools. In front of our guest of honour, our top pupils were presented prizes for outstanding progress and effort and for notable achievements in academic, curricular and pastoral fields.

20. All good things have to come to an end. See you in September 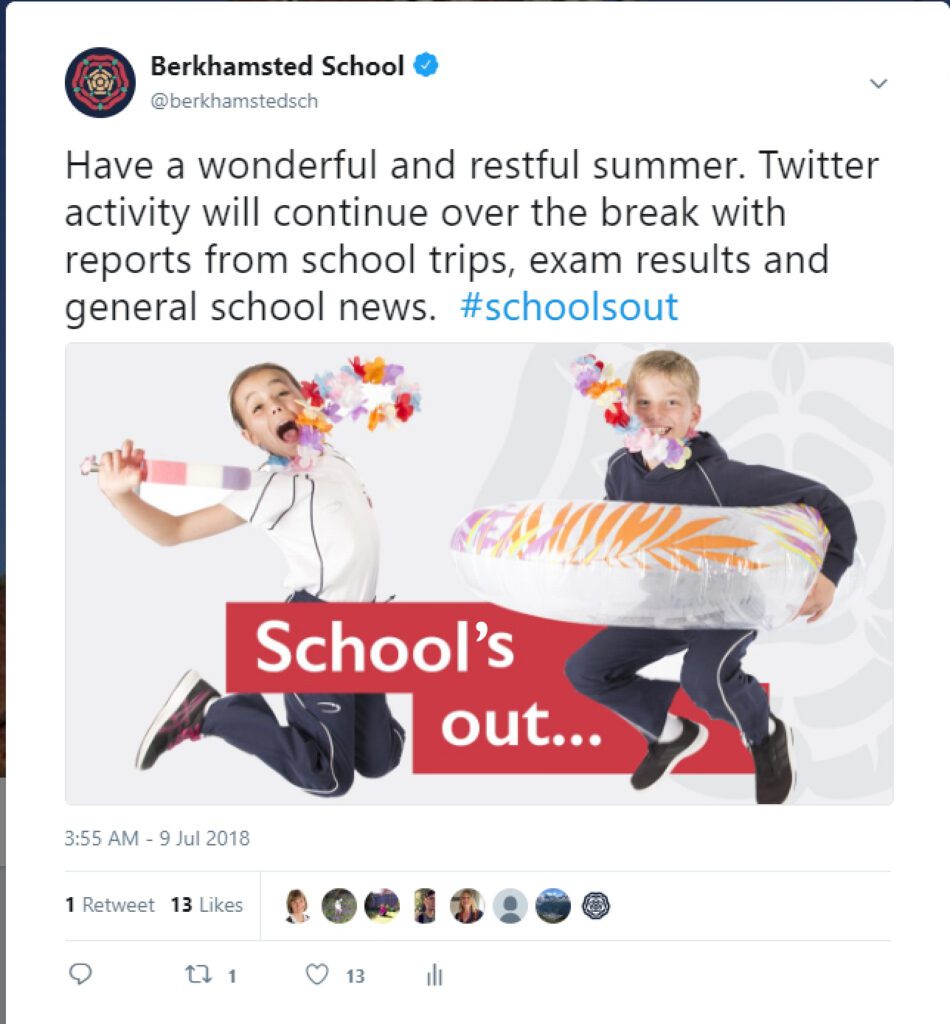