Heatherton’s winner of the annual schools’ Amersham in Bloom Design a Flowerbed Competition enjoyed an extra special dimension to her certificate presentation and planting experience last weekend. The team from BBC2’s Britain in Bloom TV series were also onsite as Amersham is to be featured on the second series, due to be aired next year. Reception pupil Sitara Sheth was one of four children whose nature-themed flowerbed design was chosen by the Amersham in Bloom team to be planted in prominent beds around Amersham. Along with the other winners, she was presented with a certificate and gift voucher by former Amersham Mayor Clive Morgan before chatting with Britain in Bloom presenter Chris Bavin about her design.

“I was a bit nervous, but very excited,” said Sitara about the experience. “I really loved planting my butterfly design.”

Sitara’s teacher Alison Holmes, who was on-hand on the day to be part of the exciting experience said: “Being involved in wonderful community events such as this one is so important. Our girls love that they regularly take part in Amersham in Bloom planting schemes and as most pupils are local girls, they get so much out of seeing the fruits of their labour. Amersham in Bloom work so hard to make our town a beautiful place to live that it’s fantastic they’ve been recognised by BBC’s Britain in Bloom series.” 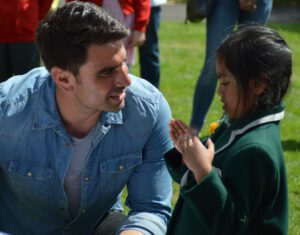 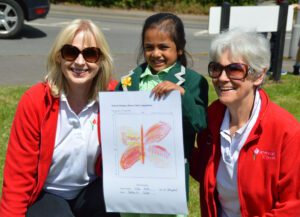