Old Berkhamstedians, Toby Knight and Josh Barton, have seen real progress in 2021 in the form of their blossoming Rugby careers. We were able to speak to Mr Mahoney, Head of Rugby at Berkhamsted for his views on these two special talents and Berkhamsted Rugby in general.

During his time at Berkhamsted, Josh Barton (pictured below – left) was Captain of Rugby and was with the school from Year 7 to Year 13. 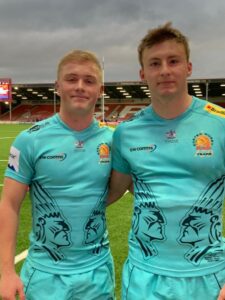 Despite Covid, Josh has worked his way into the University 1st team as fly-half and is now attracting the attention of Exeter Chiefs, making his debut off the bench against Gloucester on 20th November. He has hopes of being involved with their Christmas training. Mr Mahoney also let us know that he scored more Berkhamsted 1st XV points than anyone else on record – an impressive feat.

Did you believe Josh had what it took to succeed at the highest level?

“Josh demonstrated the work ethic, attitude and skillset to be a successful rugby player all the way from Year 7 at Berkhamsted. He is the perfect ‘team man’ in that even when not involved he always commits fully to the team’s success ahead of his own. This character trait alongside his obvious ability always made me think he would succeed at the highest level.”

Toby Knight (pictured below with the ball) joined us later in his journey for sixth form. 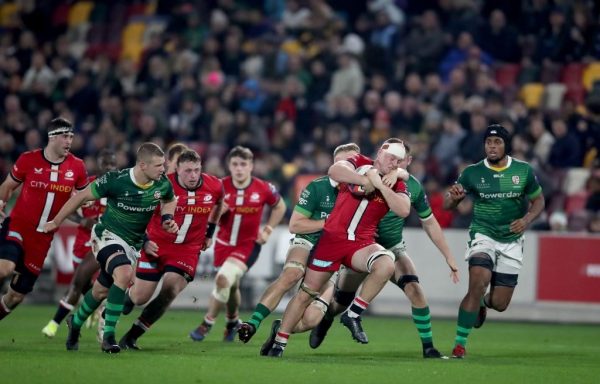 Toby – signed a Senior Academy contract with Saracens while still at Berkhamsted, played Eng U18 and is hoping to play in the U20 Six Nations this season. He has made a number of appearances for Saracens in the Premiership Cup competition this season with his first start coming against London Irish on the 19th November.

Did you believe Toby had what it took to succeed at the highest level?

“Toby came to Berkhamsted in Year 12 and immediately demonstrated his work ethic and desire to improve. He naturally has the body shape to allow him to play in the back row, however he works so hard that he has greatly increased his speed and power and has continued to do this in his time with Saracens. Along with Josh, he was always first to training and last to leave, wanting to improve every day. This dedication made it pretty clear he would make the most of his ability.”

Finally, what skills does Rugby give you and what role does the teaching aspect play?

“Rugby develops teamwork, selflessness and dedication. The 1st XV boys at Berkhamsted are expected to realise what a privilege it is to play in the team and as such, strive be role models at school both on and off the pitch. The staff all across the school help them to become rounded individuals and within the rugby staff, we try to continue to instil the values and aims of the school within all rugby players. The Berkhamsted values of aiming high with integrity, being adventurous and serving others is very much the basis of the rugby programme and the game lends itself to these exact values. Hopefully these values have helped and will continue to help both Toby and Josh in their careers.”

All of us at Berkhamsted wish our OB’s Josh Barton and Toby Knight well for the future and look forward to seeing more of them on the pitch in 2022.